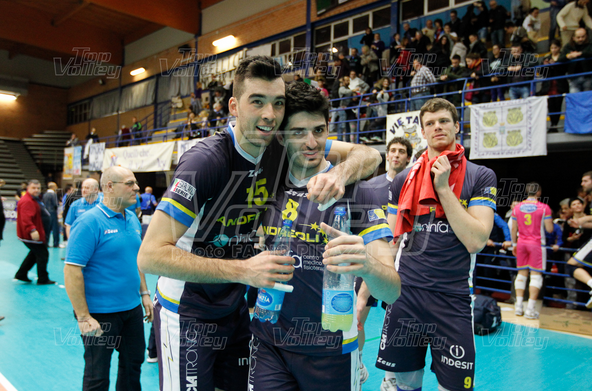 A remarkable match took place this evening at the Palabianchini competition hall in Latina.  The Italian team of Andreoli LATINA managed to survive multiple match points for the opponent in two different sets against visiting Fenerbahçe Grundig ISTANBUL to master a complete turnaround from 0:2 sets and 22-24 in the third and eventually win the first leg of the 2014 CEV Volleyball Challenge Cup – Men’s final clash by a heart-stopping 3:2 (30-32, 18-25, 26-24, 25-21, 16-14).  1,387 spectators became witnesses of a once-in-a-lifetime drama that took 2 hours and 20 minutes to determine the winner.

The very first set of the match set the tone of what was about to happen.  Fenerbahce managed to come back from a 3-9 deficit to tie the score at 12-12 and prompt a disputed ending of the set.  After 36 minutes of playtime the Turkish side squeezed out the set by a narrow 32-30.  The second set was the most one-sided in the match as Fenerbahce took control of the scoreboard shortly after the beginning and broke away for a convincing 25-18 final score.

Andreoli’s players raised their heads in the beginning of the third set to take a 4-0 lead, which however was quickly erased by the Turkish team to level the score at 4-4.  After 13-13 Fenerbahce opened up a solid gap and seemed to be cruising towards a steady straight-set win.  However, the visitors could not convert the two match points they had after 24-22.  With two aces from Todor Skrimov, the home heroes won the set by 26-24 and marked the beginning of a spectacular U-turn.

Andreoli really felt at home in the fourth set when it maintained a comfortable lead throughout and tied the match at 2:2 after a final 25-21 to prompt the tie-breaker. The squad from the Bosporus tried to copycat the women’s team of the club from another European final earlier in the day by establishing control of the fifth set.  At 14-11 Fenerbahce was once again within a point from the victory, but it never reached it.  Andreoli’s players showed some character in the conclusive moments of the match and by scoring 5 points in a row celebrated the hard-earned win.

Fenerbahce’s big star Ivan Miljkovic became the top scorer of the match with 26 points.  Leonel Marshall added 20, 6 of which by blocking.  Sasa Starovic and Todor Skrimov topped the scorers’ chart on the winning side with 21 points each as the latter impressed with a total of 5 aces.

“It is the first time that I had to face Miljkovic, after so many games we played together in the Serbian national team,” Starovic admits.  “I have to say it was exciting. As far as the match, I have to congratulate all my teammates.  In front of our audience we showed a great character, but we have not won the Cup yet.”

“A round of applause for Skrimov who put us back into the game in the third set, obviously with the help of everybody else. The fans, the city, the club – they all deserved this victory,” adds libero Salvatore Rossini.

Fenerbahce’s player Leonell Marshall comments: “I was expecting a final like this. Too bad for not having closed the tie-breaker.  Now we will put everything into the game at home.”